Some people in church get uneasy when you start talking about tattoos.  I think some of that comes from the fact that in the past, those with tattoos were the rough ones, the bad apples, and the trouble makers.  Church people gasp at people who weave into their congregations covered in tattoos, “You’ve defiled your body!”  Surprise, surprise, I am not one of those people. I have tattoos that I love.  They are a part of me, an expression of who I am.  They are the cliff notes of my story, the Ebeneezer's of my journey.  They spark conversations with strangers that lead to the discovery that not all Christians are judgmental and stiff-necked.  Johnny Depp put it so well when he said, “My body is my journal and tattoos are my story.”  This is the tattoo cliff notes version of my story. 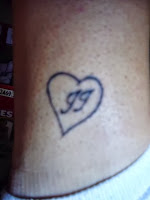 The first tattoo I ever got was this little heart with “JJ” in it.  It was one of those typical first tattoos, but it meant something deeper to me.  JJ was one of the most amazing women I have ever known.  She knew me better than anyone and was one of the few people I would let call me out on my junk.  She always pushed me to be the best version of myself.  I remember that day when I told her that I wasn’t going to go to college.  The very next day she had a stack of college applications set in front of me, “Jessica, you are going to college!”  She was amazing.  I was on a mission’s trip in Mexico when I got the news of her death.  I was broken.  More broken than I had been in a long time.

For a long time I felt guilty that I wasn’t there by her side that night, but I know now that I was right where she would have wanted me to be.  I wrote a memorial for her and we dedicated the pathway to the kindergarten we were working on that week to her.  Her death made me feel again.

In those first weeks of my sobriety, she was my motivation.  I just really wanted her to be proud of me.

Endure- “to support adverse force or influence of any kind; suffer without yielding; suffer patiently; to have or gain continued or lasting acknowledgment or recognition, as of worth, merit or greatness.” 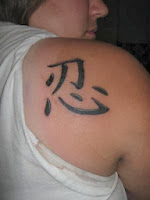 The next tattoo I got was during my sophomore year of college.  I was in the midst of my sobriety journey and at the center of a relational hurricane.  People that I loved were falling apart and I was in the middle of it all.  I had cut ties with home and my church there as anger and bitterness began to consume my thoughts and plague my nights with sleeplessness.

I was going to therapy at the time for my plethora of issues.  After an outburst of anger and an exclamation of my desire to give up, Doc asked me, “Do you know what the word ‘Endure’ means?”  As she reached for a tattered book on her shelf I replied with a shrug, “to survive, I guess.”  She licked her fingers and flipped through some of the yellowed pages then read aloud, “to support adverse force or influence of any kind; suffer without yielding; suffer patiently; to have or gain continued or lasting acknowledgment or recognition, as of worth, merit or greatness.”  She looked up and me with kind eyes, “Jess, enduring is about more than just surviving, it is about thriving.  Life will make you suffer.  It will forcefully influence you with its anger and brokenness.  Enduring isn’t just about making it out alive; Enduring is about realizing how much you are really worth and letting that become your unyielding motivation to thrive!”

The next day I used my money that was supposed to be for books to buy a tattoo, the Chinese symbol for endure on my right shoulder.  Even though it resulted in a (deserved) tongue lashing from my mother, it has since served as a reminder that endurance is about more than just getting to the finish line.

Trust- “stand by your words” 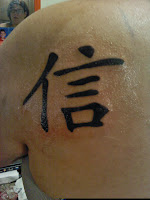 A year and a half passed after my enlightenment on endurance.  I grew strong and healthy as I began to wade into the deeper waters of what grace could do.  There were still parts of my heart that I had walls built around as the sting of open wounds still made me tense up.  Someone walked into my life that forced me to face those walls and consider what I was missing by not being brave enough to tear them down.  I had forgotten what it was like to be able to trust anyone as all those who had been granted that privilege had utterly abused it.  This person taught me what it really meant to be able to trust someone.

Soon my ability to trust led to discovering the need for me to be someone that could be trusted.  I was a really REALLY good conman.  I could lie pretty well and convince most everyone of what I wanted them to believe about me, all while wearing the mask of being a really good person.  This was beneficial when I lived a life on the dark side but as an increasing desire to do good grew within me, the cons left me feeling empty.

I made a decision to embrace honesty in the same way I do most things… radically.  I decided that I was going to tell the truth about everything all the time.  No finding loopholes, not mincing words, just pure unadulterated honesty.  This caused quite a few people to walk out of my life as the dirtiness of who I really was came to light.  Still, I found freedom in honesty.

I decided that I wanted a tattoo to mark the new milestone in my life and thought, once again of a Chinese symbol to match my “Endure” memorial.  I found the Chinese symbol for “trust” and upon further research, discovered that, translated literally, it means “stand by your words.”  I was soon in the tattoo chair as the whir of machine, smell of antiseptic, and squeeze of the hand from the person I trusted most, soothed me into rest. 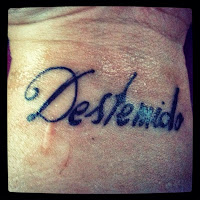 Last, but most certainly not least, my most recent tattoo.  Five years into sobriety and deep into the depths of grace, I have regained some old friends and made so many new ones.  My two best friends on this planet, have become my spaces of safety and beacons of grace in my life when I have needed it most.

Carolina and I have only known each other for a little over a year but I feel like I have known her my whole life.  She is Brazilian and she tries to teach me Portuguese while laughing at my accent.  That’s ok, don’t tell her but sometimes I laugh at her accent too! ;)  When I told her about wanting to get a new tattoo to mark my newest pursuit of a life free from fear she suggested I get it in Portuguese.  I couldn’t have agreed more!  Her friendship is one of the things that keeps me brave, keeps me striving to escape fear, so to have it tattooed in her language couldn’t have been more perfect.

It was about six months ago now that I got “Destemido” etched across my wrist while Carolina and Briana stood by with smiles of support.  It will forever be a memory I treasure and an added reminder that perfect love drives out fear.

Well, there you have it, my story in tattoos!  Now you know why I love them so much, each one marks a part of my life that I never want to forget.  There will be more to come as I cross new bridges along my journey of grace.  I can’t wait to see what new wonders and joys there are for me to take in on the other side of them!
Posted by Unknown at 11:37 AM