Inspired by my dear friend and soul sister (shout out to the Shazbot) today’s topic is fear.  I have a very odd and unique fear… of chickens.  Go ahead, get it all out, it is SOOO funny!  They are evil little beings that like to peck your eyes out and claw at your brains! I’d much rather face zombies than chickens any day!  My little brother has a somewhat more rational fear of spiders.  So, of course, as is my sisterly duty, I hide various rubber spiders throughout the house for him to find and be scared by.  It’s rather amusing when he goes in for a shower and I hear a scream followed by the loud bang of him knocking over things in his attempt at a quick retreat from the extremely deadly lifeless spider I had hidden on the bathtub.

Everyone has fears, it’s the natural make up of a human being.  No one had to tell you to be afraid you just were.  From the moment you heard that clap of thunder that sent you running to the safety of your parent’s bed, you knew how to fear.  As we grow up our fears begin to change.  The fear of the storm becomes a fear of being a good enough mom so your children will run to you during it.  Fear takes on a different face and it reaches into every part of our lives, especially our relationships. 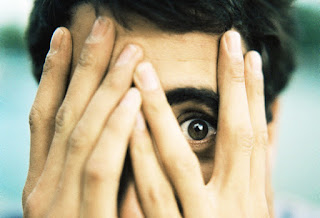 It all starts with how we think God relates to us because how we think God relates to us is how we will relate to others.  I was never a big fan of the repetition of the phrase “fear God” that I heard in the church.  I definitely was afraid of him, afraid I wasn’t good enough, afraid he was always angry with me, or afraid he was constantly waiting to punish me every time I screwed up.  Church people like to define that phrase as “respect for God.”  They always used that analogy about a child who touches a hot stove and gets burned, then he learns to respect the stove’s power so he doesn’t touch it anymore.  I was always like ummm no, he got hurt that’s why he’s not touching it, duh!  No, I think fearing God is much more than that.  I don’t think God operates by burning his followers when they reach out to touch him.

With things like this, I think we miss out because we speak English.  When I say. “I fear chickens” and when I say, “I fear God” they sound the same.  Similarly, I say I love my dad and I love coffee, but do you really think I love coffee as much as I love my dad?  Of course not!  They have very different meanings and different depth even though they are the same word.  Doesn’t English just suck sometimes? Shh, don’t tell my mom I said that!

So, I looked up the two different meanings of the word “fear” in the dictionary. The first one is what we always think of when we hear the word fear, “a distressing emotion aroused by impending danger, evil, pain, etc., whether the threat is real or imagined; the feeling or condition of being afraid.”  Common sense, right?  Well here’s the second one, “reverential awe.”

The first form of fear is deadly one.  It will destroy relationships, dreams, and self-esteem.  If you live in fear of God, that he will withhold blessings if you fail and strike you down when you don’t measure up, then you will only end up depressed, worn out, and frustrated.  If you live a life driven by fear it will keep you from chasing your dreams, being real with those around you, and even giving love to the people closest to you.  It can destroy marriages, wound your children, and make you feel worthless.  Fear… does not come from God.

The latter definition of fear, however, is one to get excited about!  Reverence in awe, those words have a little more depth than just respect.  I live in zealous reverence and complete awe of God.  Not because He demands if of me, but because he came to me in my brokenness and made me whole.  He met me in my moments of not enough and made me perfect.  He saw me when I was most unlovable and poured his favor on me.  I fear him because, though he deserves so much more, he calls the rags I offer him enough.

Which one drives you?  Reverent awe that comes from desire or a fear keeping you from living in peace?  I urge you, my friends, to jump first and fear later.  Find bravery in taking in how perfect God sees you.  Live fearlessly.  Love extravagantly.  There is freedom on the other side of fear.
Posted by Unknown at 9:53 AM