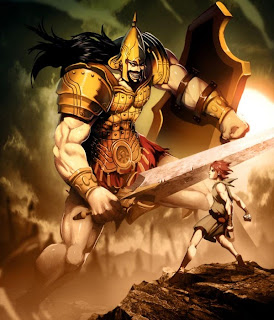 Almost everyone knows the story of David and Goliath.  It is the ultimate underdog story of a simple shepherd boy taking down a mighty warrior who left the entire army of Israel shaking in its boots.  David achieved victory through his confidence in a God bigger than himself.  We serve that very same God today and Goliath wasn’t the only giant to be faced.  We all face giants every single day.  The following are just a few of the giants that I wake up every morning and go to war against:

This giant is probably the biggest one for me personally.  The giant of inadequacy is what drove me to my darkness where I went and hid away instead of facing it.  Daily, I hear voices that name me “not enough” as I live in a world driven by duty.  It is impossible to escape a system of doing in order to gain; that is how our world functions.  I find hope in that fact that I will always be good enough, strong enough, perfect enough, and holy enough for God.  There is nothing I could do that would make me not enough for Him.  That may be what this world calls me but that is not what I answer to.

{2} The Giant of Regret- “You should have done that differently!”

Ah, the giant of regret, I know him well.  This giant and I are still in a full on battle which makes him a little tougher to talk about.  I regret quite a few things in my life.  Friendships that I destroyed, hearts that I broke, and a person I let hurt me.  The latter I thought I finally had moved past until memories of broken trust stand up and shout “Hey! Look at me!”  This giant forces me to live in my past and drives me to focus on things that don’t matter anymore.  Peace and victory comes in know that I am loved, treasured, and safe in the arms of Christ.  I don’t live in my past anymore; that Jess is dead and a new one stands in her place.

{3} The Giant of Anger- “You better get them back for treating you like that!”

There was a time when I was explosively angry.  It was actually pretty scary now that I think back on it!  I was driven by a need to exact my own brand of justice onto those crossing me.  I would explode without warning or thought.  I could go from completely calm to punching things in a split second.  Add alcohol to that equation and it’s a wonder I didn’t end up in prison!  Now my inner Hulk is more contained and doesn’t rear his ugly head quite as often.  I still struggle with my want for justice in spite of my heart for grace.  I am thankful for people who love me and remind me that God loves the hurters as much as he does those they hurt.  Luckily, I have an army behind me fighting this giant with me.

{4} The Giant of Emptiness/Addiction- “You can’t cope with that!”

Not everyone struggles with this giant, but I spend every day fighting him.  I am 5 years into my sobriety journey and I still struggle daily with my addiction.  This giant never really fights alone; He usually teams up with another giant and just shoots arrows of emptiness at me from behind him.  He is actually, oddly enough, my easiest giant to defeat because as soon as he shows up it is a red flag to me that I need to go get filled up with all that God has to offer me.  God has a fullness that emptiness is just no match for.

I can say with confidence that everyone faces this giant on a daily basis!  He usually teams up with the giant of guilt.  Failure points out our faults and guilt screams that we need to pay for them.  We all fail (shocker) and we all feel like failures sometimes.  One thing that helps me face this giant is something my dad always says.

“Failure is a prelude to success.”

Failure is simply the opportunity to learn and improve.  When we have moral failures, it’s our opportunity to take in the forgiveness that is already there waiting on us and to never want to fail in that same way again.  The confidence found in grace will always conquer the giant of failure.


Those are the big boys that try to send me running.  To be honest, some days I am the Israelite army, too afraid to fight.  Most day though, I wake up ready, armed with my sling and stones, and running full speed towards a giant that I know is no match for my God.
Posted by Unknown at 10:52 AM