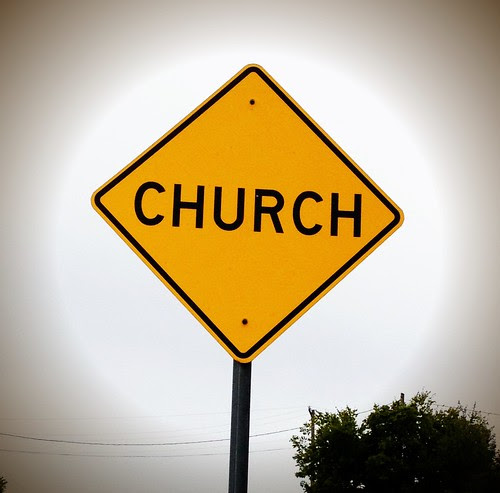 There is a lot to be learned from the church.  Many lessons are taught to us by our interactions with each other inside of it.  However, there are equally as many really awful lessons I learned in church.  The encouraging part, especially for people like me, is that God is not limited by the walls of the church or the 24 hours that make up Sunday.  Here are just a few lessons I learned about life and God outside of the church:

(1) God will never stop pursing you.

This is probably the number one thing I learned about God outside of church.  Even in my darkest of times God was still there, fighting to win my heart.  In fact, it was at my dirtiest, most entrenched in sin, moments that I felt He pursued me the hardest.  I think we have this idea floating through our churches that the deeper you trip and fall into sin, the farther you get from God.  We create this picture of a god who stops at the edge of our sinfulness and says, “Woops, sorry buddy, I can’t be around sin; you’re on your own!”  How quickly we forget He died for us while we were still sinners.  If there is anything that I know for sure it is that God will never stop pursuing us, whether it be in the depths of sin or the in the heights of holiness.

Everything I learned about being a good conman, I learned in church.  That’s harsh, but true.  My past experience in church was one of people filed into pews every Sunday, dressed in their best, plastering on a smile, and pretending everything was perfect in their lives. Discussion between one another was filled with surface struggles and safe confessions.  You know what I mean, the “work has just really been tiring this week” or “I have to confess I only spent 30 minutes on my quiet time instead of an hour today.”  What then for the people like me?  Can we say “I really doubt that God even exists” or “Life really sucks and I really just feel like getting drunk this weekend” after that?  No.  We have to put on our matching plastic face and pretend it’s all ok.  I learned quickly that pretending things are ok doesn’t actually make them ok.  We have to be able to be real with one another.  Come on, honestly, we all know no one is perfect, so can’t we just stop pretending to be?  There is strength in honesty among believers; there is power there that Satan fears.

(3) It’s important to deal with conflict.

I don’t want to brag but… I am the queen on dealing with conflict!   If we have a problem, I will let you know!  In church we tend to sweep things under the rug a lot in the name of forgiveness.  Don’t get me wrong, forgiveness is great… if you actually forgive the person.  If instead you don’t face the conflict, but then hold onto said conflict until it breeds anger and resentment toward that person that’s not really forgiveness.  I learned how to face conflict while I was going through therapy.  It was there I adopted the belief in a radical honesty that caused me to face conflict head on.  It’s amazing how silly some of our conflicts will reveal themselves to be when you face them right away.

(4) When bad things happen to you that doesn’t mean you deserve them.

BREAKING NEWS:  Bad things happen to good people.  One of my best friends, greatest mentors, and the strongest woman of faith I have ever known died very suddenly at a young age. She didn’t deserve it; it wasn’t fair.  That didn’t happen to her because God was angry with her; it happened because we live in a broken world filled with sickness and death.  I think we want an explanation for when bad things happen so we just blame it on God, “Oh God let that happen because I didn’t go to church this week.”  We live in a broken world filled with anger, hurt, brokenness, bad decisions, and failure.  Shit happens.

(5) Nothing in this world will truly satisfy you.

I learned this lesson simply by trying everything I could think of to be satisfied.  I found myself sorely disappointed and just as empty as when I started.  This world’s pleasures are fleeting.  They will only fill you until the next time you are hungry.  The more you try to fill yourself with these temporary fixes the more aware you become that really they just push against the walls of the hole making it bigger and bigger until the emptiness is too much to even try to satisfy anymore.  Want to know some really awesome news? When it comes to being right with God, being loved, feeling accepted, and needing embracing God has given to us in fullness.  No matter how wide your hole of emptiness is He will fill it and make it overflow!  “Blessed are those who hunger and thirst for righteousness, for they will be satisfied.”

These are all lessons I learned through my experience and my failures.  Learning these lessons is what brought me to God and, in turn, what led me to the truth of grace.  Look for the lessons of life that weave their way through your day to day and don’t limit God’s power to the pews.