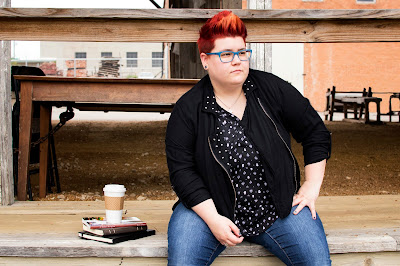 Some Stuff About Me:

~Ever since I was little I have had an obsession with Robin Hood. I remember the librarian at school would get frustrated with me because it was the only book I'd ever check out. Now I own 7 different Robin Hood movies, each of which I've seen about 10 times.

~The most girly thing about me is probably my love for painting my nails. Seriously, I probably have way more nail polish than any human could ever need.


~I like gauged ears and beanies and the the beautiful story that tattoos can tell. Differentness is gorgeously messy and I'm drawn to it.


~I believe that any day can be made better by coffee and sour gummy worms.


~I'm an all in person. I like your or I don't, there's not really any in between, but rest assured you always know where I stand.  I won't say anything behind your back that I wouldn't say to your face. (Unless it's that I think you're sexy because sometimes that can get awkward.)


-I think spearmint gum is one of the worst ideas mankind has ever had. Second only to York peppermint patties.  Chocolate and mint? Just no.


~I'm much better on paper than in real life, sometimes I just get really excited and blurt out everything that's in my head which sometimes sounds like eloquence but more often sounds like incompetence.


-If coffee didn't exist my only friends would probably be flying monkeys or those evil minions from Despicable Me 2.


-I believe, deep in the depths of my being, that God is good. Even when the world is so not, even when people are so wretched, even when bad things happen, and even when I don't understand Him.


~I come from a long line of preachers going all the way back to a circuit riding preacher named Brad Hays.  I was raised, as I like to call it, “Ultra-Baptist.” (yeah, I know, don't hold it against me.)

~As I grew up, I found emptiness in a religion of rules and regulation that attempted to gain God’s favor and constantly named me as not enough for Him.

~I struggle with depression and an anxiety disorder that, at one time, I used alcohol to medicate myself for.  I am currently 8 years sober and going strong; alcohol is just no match for the fullness of grace!

~I recently started a ministry group with my best friend called Vagabond Ministries. It's a ministry group that travels around the state organizing small group retreats, camps, worship experiences, and outreach events. I also highly support our Porcelain Doll’s ministry in Waco, Texas, that reaches out to women in the strip clubs around the city. My passion is simply for those who have never experienced true, one way, no expectations, love; to know that they are treasured beyond comprehension by a God who makes beautiful things from dust. I seek to create spaces where people can just be and know that whoever that being is, is enough. That's what Jesus was about so that's what I'm about.

~I now work for a wonderful company in Irving, Texas, as an accountant, but hope to one day make my living by writing and doing ministry.