Are you prepared to have your spiritual brain challenged? I never really am but hanging around my friends and having the awesome friend and pastor that I do it seems that I am constantly being enlightened.

I grew up in the church so I know a lot of Biblical facts, verses, and history.  I have the academics of Christianity down.  On a side note, if you think that knowing facts about Jesus will change your life or even save you take it from me… you will be sorely disappointed with your life.  Anyways, the more I dig into the Bible myself, the more the truth of the gospel of grace reveals itself to me. 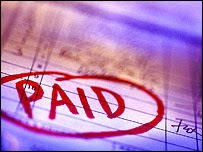 I heard the word “grace” a lot growing up but it always seemed to be a onetime occurrence in the lives of people around me.  God’s “grace” saves you.  For some it’s more than once but it’s something that is earned, worked for, and hard to gain.

Grace is so much more than that.  Grace is the COMPLETE favor of God.  It is ours apart from anything we have done or ever can do.  Christ was the ultimate and final sacrifice that didn’t get rid of the law but rather FULFILLED the law.  This is a hard concept to really get across to people so I will try my best to explain it using a story.

I am an accountant so I deal with money, book balancing, and invoices all day long (I know it sounds boring and I look nothing like an accountant but I bring a little rock and roll to the office).  So let’s say one of our clients owes us 150 bucks for cleaning their microwaves every night, we give them a bill right? When they pay that bill does it make the bill disappear? No, it just completes it and I get to file it away in a nice shiny filing cabinet in the office.

Christ came and paid the bill of the law.  He completed it and we don’t owe it anything anymore!  It would be silly for our client to keep sending us money after they have paid their bill!  How often do we do that though? We keep sending God measly payments on a bill that has already been paid for us!

How many of you have felt as if before you were a Christian the church preached a message of love and acceptance but as soon as you joined their ranks you were presented with a list of do’s and don’ts that you have to live your life by in order to gain blessings from God?  That’s not who God is.  How can we call this Good News?! Every time we do that we send in another payment to a paid off bill.  That is not what my Jesus stood for.  That’s not what He died for.

“I hope you will put up with a little more of my foolishness. Please bear with me.  For I am jealous for you with the jealousy of God himself. I promised you as a pure bride to one husband—Christ.  But I fear that somehow your pure and undivided devotion to Christ will be corrupted, just as Eve was deceived by the cunning ways of the serpent. You happily put up with whatever anyone tells you, even if they preach a different Jesus than the one we preach, or a different kind of Spirit than the one you received, or a different kind of gospel than the one you believed.  But I don’t consider myself inferior in any way to these “super apostles” who teach such things.  I may be unskilled as a speaker, but I’m not lacking in knowledge. We have made this clear to you in every possible way. Was I wrong when I humbled myself and honored you by preaching God’s Good News to you without expecting anything in return?”


I don’t know about you but I was always taught that verse was talking about different religions or evil prophets.  That just doesn’t make any sense to me.  The verse says they are people coming in the name of Jesus preaching the Gospel but it’s not the truth.  Great men of faith even, “super apostles,” preaching a message contrary to Paul’s, to truth.  Is this beginning to sound familiar to anyone else?

There are churches in America, in your town, coming in the name of Jesus and preaching a false gospel.  The Bible has more to say about those people:

I am astonished that you are so quickly deserting the one who called you by the grace of Christ and are following a different gospel— not that there really is another gospel, but there are some who are disturbing you and wanting to distort the gospel of Christ. But even if we (or an angel from heaven) should preach a gospel contrary to the one we preached to you, let him be condemned to hell!  As we have said before, and now I say again, if anyone is preaching to you a gospel contrary to what you received, let him be condemned to hell!


That is heavy stuff!  I’m not saying that anyone who thinks or believes differently than I do should be condemned to hell and I really don’t think that’s what Paul was saying either.  I just think we should be careful not to be looking so intently for false prophets outside the church walls when one could very well be standing behind our pulpits.

I used to think God was dull and demanding but the more I search for myself the more I find him partying with prostitutes, embracing the handicapped, using lepers to deliver his messages, raining bread from the sky, and laughing with children.  My Jesus is one with embracing arms not a pointing finger… and that is good news!